Feynman on the use of imaginary numbers 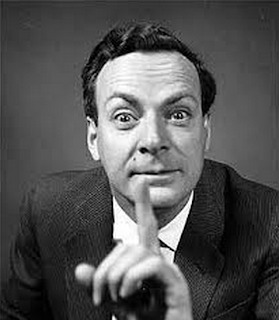 For anyone having done physics as a major, the use of imaginary number (i^2=-1) is as natural as breathing air.  In the 'shut up and calculate' sense, imaginary numbers are easy to work with, but only a fool would stop and ask 'why are we using imaginary numbers in the first place?". That part can be mysterious. Why would numbers that have no reality (no real number multiplied by itself is negative) find their way into physics? like most 'magic mysteries' of physics this one is hidden in plain sight. Most folks do not ever question the use of complex numbers in quantum theory.  Ask someone who knows a little and they will huff and puff with 'of courses', ask someone who knows a lot and some of them will pause and many will say "I don't know".

Enter Feynman: imaginary exponents
Whenever I want to get to deeper and more natural insights, I turn to Feynman. Feynman has a characteristic treatment of the imaginary exponents in his books (Lectures: chapter 22).  Feynman carefully re-derives what he calls "the most remarkable formula in mathematics"

The gripes
The treatment is thorough and bears the aura of 'naturalness' but really involves 2 hand tricks that the untrained eye will miss (I missed it on first read).
a/ the derivation starts with a clumsy differential definition of the exponential, after 22.6 he just parachutes the linear development (10^t=1+2.3025t). b/ between 22.5 and 22.6 there is a misdirection where he simply writes that the conjugate of e(it) is e(-it). Both statements are simply parachuted in his case.

Just a phase
Just as characteristically Feynman shines in a few spots.  For example he develops his expose by using 10 as the power basis for imaginary numbers, not the usual e.  This underscores the arbitrary nature of the base.  We have become so accustomed to using e that we never really question why it is there, why e, why not pi?.  He shows that whatever you use as a power base, say P, P^(it)x^P(-it) = P^(0)= 1.  So that the norm of a complex exponent is always 1.

So the complex exponents are all on the complex circle of norm one no matter what the base. Using P or using e, is just a rescaling of the t factor since if e=P^s then it = it(s/s) and P^(it)=P^(its/s)=(P^(s))(it/s) = e^(it/s) by simple algebra of exponents.  The exponent can be identified with a phase on the unit complex circle and when we are in e base then the phase length is 2pi, yielding an immediate mapping between the phase and with the arc-length of a circle of radius 1.

Differential equations
The purely algebraic treatment of the properties of imaginary exponentials is followed by the chapter on resonance which is really the application of said numbers to differential equations. Feynman clearly says one should always take the real part of the equations and that the imaginary part is non sensical.  He insists on the fact that this is possible only with linear equations so we are never multiplying imaginary numbers and making them real, thereby mixing them (23-1).

The intellectual honesty of Feynman is remarkable, no other textbook or teacher I have ever had goes to so much length to establish the validity of the basic constructs. In the case of linear differential equations, the solving can be done by inspection by replacing the differentiation by a iw factor. The formula for resonance just pops out. The use of imaginary number finds a natural justification as a powerful tool to solve basic differential equations.

More gripes re: QM
Feynman is rigorous up to that level. In this sense imaginary numbers are a mathematical trick to deal with linear differential equations.  Yet in Quantum Mechanics (QM), which he himself contributed so much to via Quantum Electro-Dynamics (QED), one takes the square of amplitude mixing real and imaginary in order to find probabilities and non linear equations are the cat's meow in solid state physics anyways, where we will have powers of the imaginary numbers, again mixing real and imaginary components. As a matter of fact interference is modeled by this mixing. The use of imaginary numbers reverts to axiomatic status in QM (hypothesis), but epistemologically, the fact that it describes nature so precisely points to the fact that these imaginary numbers are a representation for something 'real', what that 'something' is (a phase, a twistor, whatever) is never really explained in most text book. Practitioners seldom question their practices.

Thermodynamics and grand ensemble statistics
More importantly and far from textbook land, one of the open frontiers of QM is why the path integral formalism looks so much like that of thermodynamics (average over large ensembles) but with (ixt) replaced by 1/T, where t is time and T is temperature.  One treatment is dynamic (time) the other static and comprises a classical temperature.  I asked that very question once to a Nobel worthy professor, he smiled and said "just replace it by 1/T and you are done" I pointed out it wasn't physical, that the dimensions didn't even match. When I repeated the same question 6 month and claimed I could just replace it by 1/T  he would say "aaah, but you can't do that, you need to explain why there is a "i" there, that is the mystery"... it made me smile...

This is the reason I pay so much attention to the presence and justifications for the presence of i in these equations. I have no doubt they should be there, after all the formalism works.  But if QM is indeed a statistical ensemble (non-deterministic) of things existing at the planck level, then something brings about the 'i' behavior, things that twist in a funky way, things that have a phase. I remind myself that planck constructs exist at 10^-35m length and that the standard model operates at 10^-15m, there are 20 orders of magnitude in between. In 3D that is a volume with 60 orders of magnitude small planck volume.  In other words, an electron is hardly a particle but seems to contain 10^60 things in it.  There are more planck things in a electron, than electrons on earth,  it would be surprising if the electron was not a statistical beast.  The standing of i in our statistical ensembles is then epistemologically important.

Popular posts from this blog

January 16, 2008
So Pony Tail Boy woke up a couple of month ago and decided he had nothing to lose in software and that he might as well go out and spend a bunch of money on Open Source.

First off: CONGRATULATIONS TO MY FRIENDS AT MYSQL. YOU GUYS DESERVE IT AND I AM TRULY HAPPY FOR ALL OF YOU. YOUR PATIENCE, TALENT AND DEDICATION HAVE PAID OFF. WELL DONE MARTEN, WELL DONE EVERYONE.

Third. There will not be an open source company that goes public for the foreseeable future. Liquidity is too good and too hard to pass up. The players are too big with too much at stake. That's a shame... I wanted to see an ecosystem of independent companies.

Fourth. SUN goes with MySQL, BEA is acquired by ORACLE. When the music stops there is only one chair left, RHT. The music stopped this morning.

I need a Xanax
Read more

So I have retreated to my batcave, I have put on my thinking cap, I have closed off the door so I could think more than 23 seconds without being interrupted by the kids. I have reach that inner zen point where the walls are transparent and I can see, I can see where the industry is headed. I have called good friends in the industry to get their perspective, I have expensed great brain power to analyze the implications SUN/MySQL merger. I have come up with this:

I must be getting old and out of touch, the dark side, everything clouds, because you know $1B is a billion dollar and Pony Tail Boy is no dummy. SO I read his blog, someone explained the transcript to me but I feel like Harry Seldon in "The Foundations" series when the diplomat visits: 30 minutes of words later and I still don't have any signal. I recheck my equipment but sorry, I come up with ZILCH.

So I will repeat the party line as if I had understood it.

November 19, 2007
Now enjoying my status as a sage of the industry, which is to say I am older than 20, but alas, not a billionaire, God fuck-it; people are all the time asking me for nuggets of wisdom from my vast experience at the top.

Quickies from marcf #3: What IP is there to protect in OSS?

B.D asks: "marcf, my open source project is starting to enjoy a measure of success, I am thinking of going professional with it, I am thinking about business models. How much thought should I put in protecting my Intellectual Property?"

Answer: B.D. protecting IP in OSS is extremelly important. The only "private" property that exists in OSS are 1- brand 2- URL. Both are obviously related but really you need to protect your brand name, in other words REGISTER your trademarks, use them, declare they are yours and enforce the trademark, meaning protect against infringement. Other products, specifically based on your product should not include your name. Consultancies will be able to say they …
Read more